Internship With Barrel Horse Trainers: Be On Time

Hello everybody, this is Shelby Olyschlager. I have a topic that I want to share

and it has to do with my internship experience! This story is brought to you by the end of my

I was living with a family in Wyoming for most of my time when I was in the States and it was awesome. They let me ride a really cool horse but, the only thing that I realized after once I was there, the purpose of me going on this trip was to learn from trainers and try to learn how I could be better. So that whole concept ended up leaving. I was with this family and I was just riding with them, but I wasn’t working alongside any trainers like I wanted.

So, when I was at the fizz bomb, I met a couple and I took the opportunity to go to South Dakota for 1 month. Within that month, I was doing more of the basic work that it takes to own a horse facility and have it running well. Anyone knows if you have a horse, what kind of work is involved. But with this, it was a little different and it was a challenge!

I felt like it really tested me and tested who I am as a person, a worker and a horse person.

I was living in a cabin just down the street from where I was working. The trainers set it up for me where they rented the cabin. It was a little weekender cabin that people would rent out as an Airbnb for the weekend. I lived there by myself and then I would drive a little side by side, like a ranger side by side to the barn; to their place. Every day I did that and I had to be there at seven 30 to start feeding. It wasn’t there at 7:30, it was the first horse was eating at 7:30. 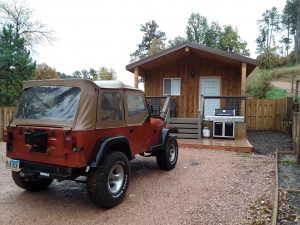 The thing is, it is their own place, you have to understand that they’re really particular about how they want things done, which I respect. But my punctuality skills are not at par like they’re pretty bad. So the one day I think I got there a little bit after 7:30, maybe 7:33. I didn’t think even anyone was there that saw me, but I was definitely told later that I was late and so I was like, “okay, you’re right. I’m sorry. It won’t happen.” I’m thinking, it was a couple of minutes but I mean if they are strict on when the horses start eating, I need to respect that and get my butt out to bed earlier and make sure I am there.

Well, shortly after that I ended up being a few minutes late again. I was rushing to try to make it!

I thought because I was really close to their place, that I didn’t need a lot of time to get to work because I was literally down the street. But by the time I got on a side by side, drove down this street, went into the gates of their place, parked the thing, go to the hay bale and all that. It took at least five minutes. But it took me a while to really realize I needed that much time. I just like to give myself unnecessary anxiety by rushing and almost be late.

On one particular day, I ended up being late and I got scolded pretty good for it. I was so shocked because I was 1 minute late and I got bitched at for it. After that happened I was stunned and didn’t even realize what had happened.  Later on in the day, when none of them would talk to me, he ended up coming up to me and apologizing for how he acted, but not what he said.

I honestly, I thought about it and I was just thinking “you know what, like this guy has a point.”

My lesson that I learned was:

At the time your boss is going to get mad at you for something, but before you get in a huff,  if you actually think about it, they’re not saying anything else, they’re just saying that ONE point. In my case, his point was right. I was thinking to myself “honestly I am really bad at punctuality. If I’m going to be honest with myself, I’m not good at it and I don’t have good time management skills.” He totally called me out on it! It wasn’t the nicest way, but he still called me out and I had to take it for what it was and maybe learn from it.

I can tell you what, I was never late again.

I made sure that I was up! I gave myself at least five minutes to get over there and to get at the bale. I was at least early or on time and that’s what he wanted. So I just needed a bit of like that tough love I guess, or the discipline to actually be like, you know what, like I can show up on time, like don’t be lazy. And that was just one of the lessons I learned.

and feel hard done by, but they’re just saying one point.

They’re not saying you’re a terrible worker. He just said, “show up on time, don’t be late” (in a not so nice way). He wasn’t saying I didn’t work hard or anything, it was just the one point and I had to take that.  You got to take it for what it is and there might’ve made a mistake with the delivery, but at the same time he had a point and I had to accept it.

When you have someone tell you what’s what, you have to think about if you’re actually in the wrong or not, and if you were in the wrong, accept it and move forward and just take it as a lesson learned.

That was one of the lessons I learned while interning among many others. But stay tuned for those ones. If you have any questions about it, let me know.

Uh, yeah, there, there’s my story.

This site uses Akismet to reduce spam. Learn how your comment data is processed.